We're still going at it at the Juana Run 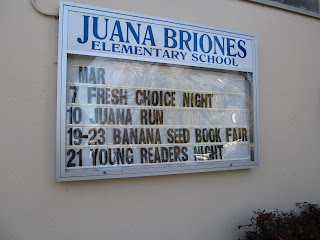 A couple days ago, someone asked me what my favorite race was.  What a hard question, having run so many races for over 30 years in so many places, all of which held a significance at one time.   I was tempted to answer "my next one", but after giving it some further thought decided to that my favorite race was The Juana Run, which indeed was my next race.

What's so great about The Juana Run, held every March at Palo Alto's Juana Briones Elementary School?  Maybe it's so great because it's such a modest community race, with a small time feel but plenty of great competition that's effortlessly well organized.  There was a time when my favorite race was  Wharf to Wharf, a super-intense six miler of 15,000 runners with a world class field clawing and scratching through the laid back coastal town of Santa Cruz each July, or the Dammit Run, a crazy 5-miler in Los Gatos in August that starts on a track crammed with 1,000 runners that leads to a gentle running trail for about a mile before you hit then three diabolical hills in rapid succession, each tougher than the last, before two miles of roller coaster down hills to the finish.

Held in March, The Juana Run is one of those early season races for gauging your fitness and finding your racing legs again.  It's also a pretty flat course, making pacing pretty easy.  At the start, I held back but still felt a bit labored holding the pace, not a good combination.  But coming through the first mile at 5:56, I'm thinking "Well, this is OK" since a 6-minute per mile, 30:00 for the 5 miles was my "A" goal, with a 30:30 my "B" goal.

I ran the next couple miles with the top female finisher coming through mile three at 18:02 .  But then she started pulling away (I hate it when they do that) and I started falling off the six minute pace, finishing in 30:19, which was 10 seconds faster than last year's time.  It's nice to be a little faster as I get a little older.

After the race, a bumped into a runner I sometimes trained with and raced against during my college days during the 80's Washington University in St. Louis.   We see each other once or twice a year now and catch up a bit whenever we do.

We both got married, divorced, and then remarried.  We both have two kids.  We both still have tendinitis, his in his Achilles tendon, mine in my left knee, except it's a lot worse for both of us now.  Both of us wonder if some day, our failing body parts are going to get their wish, and we'll hang up the racing flats for good.  We talk about our failed marriages in hushed tones, using stock phrases people use like "it was just a difficult situation" to avoid saying too much about the dark places we've endured.  We talk about the happiness our kids bring.

Two thousand miles away from St. Louis and 25 years later we're still going at it.  And just like the old days, he beats me by over 30 seconds.  That used to piss me off.  Now it doesn't matter. 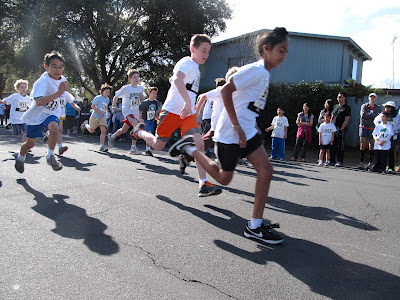