Last week I wandered out of the beer Siberia of the South Bay into San Francisco's Thirsty Bear for small pre-SF Beer Week media event. There, a number breweries sampled beers to be featured during SF Beer Week, with many of the brewmasters on hand to talk about them. As you might expect, the heavy hitters you've come to know and love like Anchor Brewing, Sierra Nevada, 21st Amendment, Almanac, Magnolia and Speakeasy all pouring both the old favorites and some interesting new concoctions. What I especially wanted to find were some of the new, smaller breweries that hadn't quite hit my radar screen. Given so that many breweries continue to re-invent beer, I was not surprised to find number of little known interesting and innovative beers to look out for during SF Beer Week. Maybe you've heard of them, maybe you haven't. Either way, let's get right to some of the lesser known beers I think you should be looking out for during SF Beer Week.

SMASH Citra IPA from Black Sands - The SMASH series from Black Sands stands for "Single Malt and Single Hop" and Black Sands has no fewer than six of these SMASH series beers ready for SF Beer Week. As for SMASH Citra, it uses Weyermann Pilsner Malt to create a platform for the Citra hops to do its grapefruity, lightly resinous thing. The simplicity and restraint, at only 64 ibu's and 5.9% abv, works to this brews advantage.

Dark Bullitt Imperial Porter from Bartlett Hall - Brewmaster Wynn Whisenhunt described this beer as chocolate coffee milkshake beer. Thankfully, Dark Bullitt didn't taste like a chocolate coffee milkshake beer. Instead of the horrible syrupy sweet mess one might expect with that introduction, what I got instead was a dynamite combination of coffee, dark chocolate, vanilla beans and lactose sugar giving it a surprising light, complex, dark chocolate and milky coffee quality with very little sweetness.  At 8.8% abv, it hides its alcohol well and all the strong flavors find a way to meld comfortably together to all pop without becoming too intense. A real pleasure to drink. 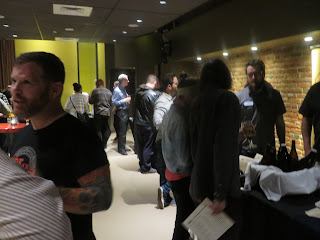 Lightship Sour Solera from Headlands Brewing - Headlands Brewmast Phil Cutti takes his GABF Medal winning Point Bonita Pilsner, ages it in Cabernet barrels, and then adds various bugs to sour the brew, transforming it into something lively, lightly sour and surprisingly fruity despite no actual fruit additions. At 5.4% abv, it's an almost sessionable sour and a rare sour you can enjoy without thinking too hard about it....or enjoy by thinking real hard about it.

Park Hoppy Wheat Beer from Fort Point Beer - Wheat beers and hops is a tricky combination, and Fort Point really pulls it off with Park. A smattering of Citra hops creates an extra grapefruit dimension to the underlying wheat beer, producing a rather refreshing and at 4.7% abv, very sessionable brew.

A big part of SF Beer Week is discovery. Here's to your discovery of these beers, or those just as good, during SF Beer Week.
at January 18, 2016