Beer of the Month: Summer 2010 by Almanac 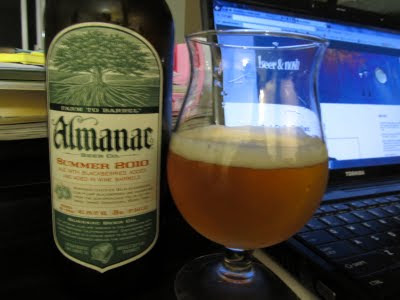 This review is really a sham, because I just don't have the guts to trash this beer. That's because Jesse Friedman, one of the co-founders of Almanac is such a revered figure in the Bay Area Beer Blogging world. He created the highly influential Beer & Nosh, full of gorgeous photography, clever yet economical prose, and plenty of hip culinary insight before becoming an honest to goodness professional brewer by founding Alamanac Beer with Damian Fagen. I would face likely beer blogger banishment and excommunication if I even dared whisper a bad thing about Alamanac's inaugural release, called simply Summer 2010, for the time of its inception.

It's a citra hopped, golden ale, aged for months in oak red wine barrel with four, count 'em, four varieties of Sonoma County blackberries thrown in for good measure. To me, this all sounds dangerously like too much is going on, and I expected this either to be something really good, or turn into some horribly over done monstrosity.

And so it was an awkward moment when I first tasted Summer 2010, and was rather underwhelmed by it, as all I could really taste was a lot of toasty malt and little else. But there lies the beauty of this beer, as my first sips were of it chilled, right out of the refrigerator. As it warmed, all sorts of new flavors started to emerge. First some punchy red wine flavors, then a little bit of oak, and then some very delicate notes of blackberry could be teased out of each sip as it gradually warmed. While the conventional wisdom is that beer should be brought to temperature before serving, I found it more fun drinking it this way.

So while saying bad things about this beer could be dangerous to this blog's survival, you'll just have to believe me when I tell you all the layers of subtle flavors really work together to produce something unique and intriguing. Trust me on this one.

The label suggests that this beer pairs well triple-cream cheeses, roast pork, and grilled stone fruit. I guess so. Frankly, I find beer pairing to be a black art, so I'd take their word for it. Like all beer, it also goes well with pizza.

Have they inspired me to take my homebrewing professional? Uh, no. Given my rather modest and sometimes undrinkable homebrews, I'll stick to blogging and running, and let the guys who actually know how to brew go pro. And I honestly can't wait to see what they do next. Their first act is a tough one to follow. Whether or not they can meet or exceed the high standards they've set for themselves, it seems every one's curiosity is peaked just to watch them try.
at August 15, 2011