The Session #54: You say it's sour like it's a good thing

This month, Jon Abernathy of The Brew Site takes The Session into the surprisingly uncharted territory of sour beers.

I’ve brewed a couple sour ales. Problem is, they were not supposed to taste sour. Some unwanted bug landed into some of my recent home brews making them taste like somebody poured a bottle of vinegar into the carboy, a rather harsh reminder that successful brewing is a lot more about maintaining clinical sanitation practices than it is about creatively crafting a killer recipe. Sourness is something I try to keep out of my home brews.

Sourness also seems to have a bit of an image problem. Having sour grapes is not a good thing, and it generally not nice to tell someone to “go suck on a lemon”. We do not usually call our loved ones “vinegar” or “citric acid” and instead use words like “honey” and “sugar”. And so it must be no simple trick for brewers to harness the often unpleasant taste of sourness and turn it into something drinkable, even enjoyable, let alone convince paying customers to actually try it.

I hadn’t ventured into sour ale territory much until a few months ago when my wife and I went out with some friends to a sour ale tasting night at the Rose & Crown, a small pub shoe horned into a stone building just off the main drag in downtown Palo Alto, CA. All four of us ordered seven glasses, each of different sour ales and past them around for everyone to try. We enjoyed most of the selections, but curiously enough, each of us had a different favorite that was often the least favorite of someone else. Perhaps injecting sourness into a brew not only requires a difficult balancing act, but any brewer going to that trouble isn’t going to please everyone, no matter how skillfully done. But then, what do I know about sour ale since I generally avoid anything with the word “sour” in it. 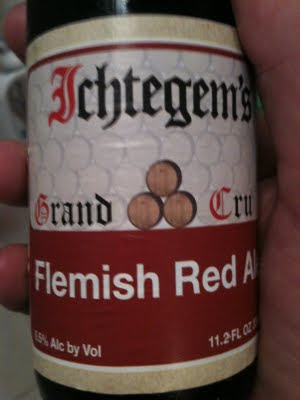 So for this month’s Session, I decided to once again to brave the world of sour ales. The first one I tried was Ichtegam’s Grand Cru Flemish Red Ale I picked up at my local grocery store. Perhaps what drew me to this sour ale was that it came in a small bottle, so if I didn’t like it, I wouldn’t be pouring all that much of it down the drain. The good news is that didn’t happen, as I enjoyed the flavors of dried fruit, figs, a light malty toastiness, and only a light sourness which combined to produce an enjoyable brew. This was no flavor explosion, but a pleasant, easily quaffed beverage that would go well with any simple dinner. (Don’t ask me to get all culinary here and give you a bunch of foods to pair this with, as I would simply be making a bunch of wild guesses.) 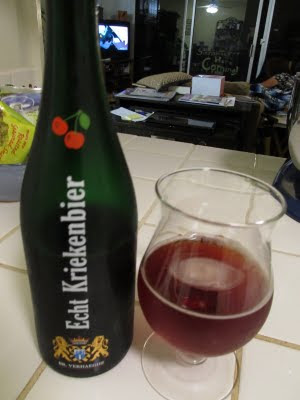 Having survived that, it was time to move on to another one, and I courageously selected one that came in a larger bottle, Echt Kriekenbier from Belgium’s Brouwerij Verhaeghe, a Belgian ale aged in oak barrels flavored with cherries. Simply pouring this beer in the glass was worth the considerable price of the bottle, as this simple act created all sorts of great cherry aromas. As for the taste, there’s nothing really complicated about it. It’s mostly just lots of sour cherries and lots of oak, which is pretty good if you ask me. This was a great find.

So thanks to Jon Abernathy at The Brew Site and for further broadening my horizons to realize that sourness is not always a bad thing. Just as long as it doesn’t creep its way back in my home brews.
at August 05, 2011