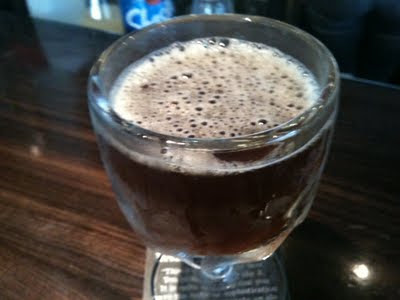 I spent last week in San Diego at a trade show that I’ve been going to for years so by now I pretty much have the whole week's drill down. Monday is set-up day, and I fly in and help get things set-up in our booth at the exhibit hall and then go back to my hotel. Apparently, the beer gods were smiling on me when I made me hotel reservation on Priceline since of all the places that could have accepted my bid, it was at the Comfort Inn in the Gaslamp District almost directly across the street from one of the best beer bars in America, The Neighborhood, a bar full of artsy, counter culture décor including its trademark portrait of dreamily reverent of Jesus Christ about to bite into a hamburger.

I make my way to the Neighborhood in the early evening and they just starting to pour a new release from Stone Brewing called Punishment. Punishment is made with Stone's Double Bastard, their Imperial version of Arrogant Bastard which they then age in Oak Barrels, and then finally add a bunch of different chili peppers straight from owner Greg Koch’s backyard garden to it. My first reaction upon hearing how it was made was to completely avoid it, but as I quietly sipped a sweet and malty Hair of the Dog Adam, a nagging curiosity overcame my better judgment and I ordered it next.

At first sip, the beer has a wonderfully heavy, luxurious, apricot fruitiness mellowed by the smooth oak and then POW! the chili peppers kick in and overwhelm everything before slowly dissipating as the beer slides down the throat so you can repeat the same experience for the next sip.

This is not a beer you can really enjoy with food, or drink to unwind, but seems brewed merely for brewing sake. It is not a beer to be enjoyed, but to experience Stone masterfully manipulating strong flavors to simply to tease and trick you.

The next night, curiosity gets the better of me again, and I have another Punishment just to reaffirm my thoughts on this whole brewing exercise. I don’t want to have this beer a third time.
at August 29, 2011