Would you buy a beer from this man? 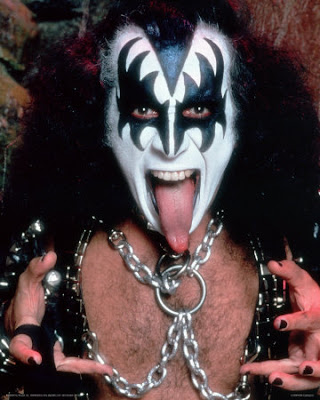 I suppose it's a sign of craft beer's success that none other than Gene Simmons is getting into the act.  He's helping relauch a theme restaurant in El Segundo, CA with LA  restaurateur Michael Zislis and concert promoter Dave Furano based on rock 'n' roll and craft beer called Rock & Brews, set to open to much fanfare April 3rd.   It'll supposedly feature of world class tap list of over 40 beers, and having actually seen a version of Rock & Brews elusive tap list, (it's no longer on their website for some reason) will have to admit it looked pretty good.  Their capitalistic plot includes expansion plans in the  Los Angeles area, including one at Los Angeles International Airport, as well as locations in Denver, Atlanta, Maui, Tokyo, Los Cabos in Mexico, and who knows where else. They anticipate opening of four Rock & Brews in 2012 with aggressive plans for continued expansion worldwide beginning in 2013 and beyond.

And while this certainly seems like the latest in a long line of insipid Gene Simmons gimmicks, you have to admit he's quite shrewd at spotting a trend and cashing in on it.  After all, KISS started as an early 70's glam band, morphed into a late 70's hard rock act, then after a brief fling with album oriented rock (Music from the Elder), ditched the costumes and make-up and scored reasonable success in the 80's as a hair metal band, hanging around long enough before the wave of 70's nostalgia hit and the band came full circle, putting the costumes and make-up back on.  And as tedious as Gene Simmons's reality show is, I'm sure he'll be happy to remind you that he's making plenty of money doing it and lots of people are watching.

But of course, if you're some unknown idealistic singer-songwriter, Gene Simmons is not some cartoonish figure, but pure evil.  Here you are, trying to make a living creating music full of significance and meaning, and Simmons comes along and buries you with a bunch of pyrotechnics and banal lyrics.  But don't underestimate the considerable skill and talent KISS had in creating thrill and excitement out of emptiness.  And truth be told, if I'm given the choice between seeing some passionate musician crooning about world peace and how the break-up with his girlfriend helped him appreciate existential philosophy, or KISS do its thing onstage, I'm headed towards the explosions.  So the question is, will Gene Simmons do the same for craft beer he did for music?

You can argue a guy who can demonstrably sell stuff is going to be good for craft beer, as he provides another outlet for breweries to sell into.  So if you're a brewery trying to find new taps, this is good news.   And if Rock & Brews is providing exposure for breweries the public might not discover otherwise, isn't this a good thing?  But if you're a small brewpub or beer bar, and all of sudden Gene and his crew blow into town, life might start getting pretty difficult.

The continued success of craft beer makes its inevitable that more and more corporate acts get involved, and there is increasingly less emphasis on supporting your local brewer and more focus on supporting the bottom line.  Is Gene Simmons and his brethren the new face of craft beer?  Like it not, you'd better get used to it.