The Session #30 : Raspberry Lambic Gelatin in a Brain Shaped Mold

For this months session, Beer Desserts, David Jensen of Beer47 , asks "What beer desserts have you tried and liked? Disliked? What beer styles work well with dessert and which ones do not? Do you have any beer dessert recipes that you enjoyed and would like to share?"

Back in my beer swilling college days, I had some grasp of the concept of beer and desserts. One evening after knocking back a few cans of Busch beer, I filled a plastic tumbler with a couple more cans of the stuff, and then plopped in a couple scoops of mint chocolate chip ice cream. After showing everyone on my dorm floor this beer float, and taking a few chugs on a couple dares, somehow, this dreadful concoction ended up in an out of the way corner of my dorm room, and was forgotten. When I discovered it a few days later, some sort of mold was growing in it, the ice cream had morphed into sort some of crust, and the whole thing smelled rather nasty. Since my roommate was also a runner, funky smells in our living space were rather common, a likely explanation for why it went undetected for so long.

Twenty some odd years later, the death of my grandmother in early 2007 provided an unlikely catalyst for new experimentation with desserts. After she was buried in Springfield, Illinois, her church provided a potluck lunch for family and friends of the departed, which included a few jello salads. At this difficult time, we all expressed our surprise that this traditional Midwestern comfort food seemed to be, well, quite comforting. We couldn't quite understand why this culinary relic of the 50's, with strange combinations like grated carrots mixed into orange jello had this effect on us. Perhaps, like any good comfort food it brought us to a simpler time of our youth.

After the service, Dad brought us to his mother's apartment, and asked my sister, Leigh, and I to take one thing back home with us. I took Grandma's Harry Cary beer coaster. Leigh took Grandma's recipe box sitting on the kitchen counter, with several jello salad recipes inside. My sister mailed me photo copies of all the recipes, and Grandma's Cherry Cola Jello Salad has become a popular dessert I've brought to many gatherings.

Seeing my interest in jello molds, a couple friends of mine gave me a brain shaped gelatin mold as a birthday gift, inspiring me to create a couple original deserts. First, I developed a Red Hot Russian Gelatin Brain, made with vodka and flavored with cayenne and cinnamon. And I put together a kid-friendly Blue Hawaii Jello Brain, using a package of Blueberry Jello, some crushed pineapple, and then my kids garnish it with gummy sharks.

So with this session topic, I decided to find the old brain gelatin mold and work up a new creation. I decided to use Lindemans' Raspberry Lambic for this mold, thinking its sweet, fruity, and tart flavor combination would work well in gelatin. 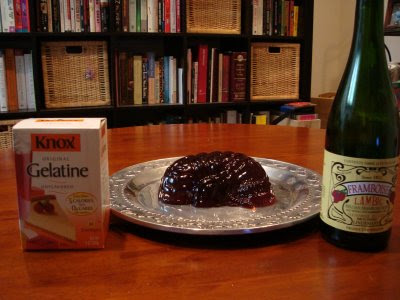 I experimented twice with the recipe and technique, and settled on a formula which uses a 750 ml bottle of Lindemans' Raspberry Lambic, which is about three cups of liquid, and 1/4 cup of water. The Knox gelatin powder directions call for one packet of powder per cup of liquid, but I found this made the mold a little stiff, so I used approximately 2 1/2 packets of powder for the 3 cups of liquid. I heated the 1/4 of water in a sauce pan and dissolved as much of the Knox gelatin as I could into it, about 2 packets worth. The idea here is avoid exposure of the lambic to the heat, which I feared could change its flavor. I had to pour in about a half cup of the lambic to dissolve the remaining powder, and then added the rest of the lambic in, slowly stirring it evenly distribute the gelatin, and then transferred it into the brain mold. The lambic foamed up a bit, so I let the foam subside before putting it into the refrigerator to set.

As for the taste, I found this technique did a good job preserving the lambic flavor in the gelatin. On the first try, I used a full cup of water and three cups of the lambic to dissolve four packets of gelatin, but I found this created a very stiff mold, that had a bit of a "washed out" flavor. Both times, I noticed the lambic gelatin picked up a slightly earthy bitterness, but the second run with less water, this bitterness was a lot less pronounced, and the lambic kept more of its tart, acidic character. Actually, I might add a little lemon juice on the third go around to replace some of lost acidity. I could also cut back on the gelatin powder a bit more.

Of course, since the carbonation and liquid sensation on the tongue is totally lost when the lambic is made into gelatin, the mouth feel and overall taste is unavoidably modified. I found it very instructive to drink the lambic while sampling the lambic gelatin to best understand how this process transforms the overall flavor and sensation of the lambic. I think the final result makes a decent dessert, although I'd recommend adding something like whipped cream, or some sort of chocolate sauce or ice cream, to give the dessert a little depth and contrast. Some sort of mint infusion into the lambic gelatin might also work.

Another beer I thought about using for a gelatin mold was a sweet barleywine like Lagunitas Brown Shugga. Any ideas for beers that might work well in a gelatin mold?