The Neighborhood in San Diego

This place seems to be trying real hard at being hip and arty. At the far corner of this bar are separate paintings of Jimi Hendrix and Jesus Christ eating a cheese burger. Next to these paintings is a sculpture consisting of an industrial, grey metal star placed surrounded on both sides by a row of four human skulls. I spent a couple evenings contemplating the deep meanings of this artwork and, sorry to say, failed to come up with anything. All I can really conclude after a couple short sessions is that The Neighborhood is a pretty good place to get a beer.

Looks like others have come to the same conclusion. It made the Draft Magazine's list of one of the 200+ best beer bars in America in it's August 2009 issue, and plenty of other local acclaim The Neighborhood proudly displays on their web site. The tap and bottle lists are written on chalkboards and mirrors in a hurried, sloppy script writing similar to gangster graffiti. I suppose it allows the residents from nearby high rise condos to get in touch with their inner gang banger. Given its close proximity to Petco Park, it does a pretty good business with people merely seeking to get a beer before or after a Padres game. 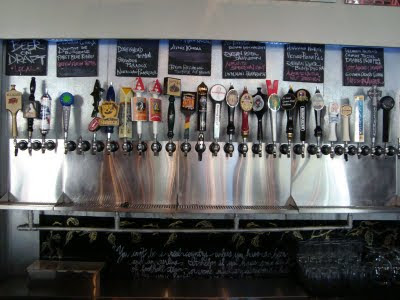 I really appreciated The Neighborhood's tap and bottle lists' wide variety of styles, which pays homage to the great local breweries San Diego has to offer, while including many unique and tasty brews from far away lands. Here's a brief run down of what I tried there.

Victory Brewing Prima Pils
OK, it makes complete sense that the first beer I have in San Diego, is from Victory Brewing, 2,500 miles away in Downing, PA. Victory has long been one of my favorite breweries, and Prima Pils is a brew I’ve been wanting to try for some time. Thankfully, The Neighborhood had it. Like any good pils, it’s got a crisp grassy hops finish. Unlike most pils, I picked up some savory herbal character with all that hoppy goodness, giving it a rare complexity for a pilsner.

Stone Brewing Pale Ale with Coriander (Cask Conditioned)
Not what one normally expects from Stone. Tasted very light and feathery from the cask, and balanced between the malt and hops. A little floral, and the coriander gives this one a light, savory dimension. Well blended, and I found this very memorable.

Hitachino Nest Red Rice Ale
From Kiuchi Brewery in Japan, one of the most unique beers I've ever tried, made with red rice and Hallertauer hops. It's got a tangy, fruitiness this seemed cherry-like to me, and maybe a little strawberry in there. Or maybe it's just this brew's hazy pink color playing tricks on my taste buds. Light, bubbly level of carbonation. Is it just me, as does this seem a little like a Belgian sour ale? This intriguing brew poses a Zen-like puzzles.

Alesmith Speedway Stout
A big, thick, rich double Stout with plenty of chocolate malty goodness, and a little aftertaste of bitter coffee, which has been added to the brew. It's aged in bourbon barrels just to give it slightly more complexity. Just the barest whisper of sweetness, and the 12% abv is undetectable. Another excellent Alesmith brew and a great way to cap off my last evening there.