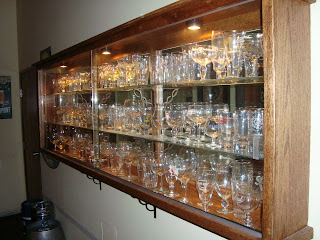 The Toronado in San Diego is an expansion, if you will, of the temple of beer of the same name in San Francisco. I went with a long time friend I hadn't seen in a couple years, so I was more occupied with catching up with her, then scribbling down notes and making observations for this post. So there isn't a whole lot I can say about it, but what can I say having been there once?

Well, it's kind of loud, as we had to find a picnic table in the corner at the back patio to carry on a conversation, which still required us to talk in elevated voices. I didn't see a juke box, but late 70's Clash featured prominently in the background music. And the wait staff could've been more patient and understanding with customers as they figured out what to get on tap, without getting into the really surely attitudes the Toronado in San Francisco has a reputation for. Maybe they should call this place Toronado Lite.

The tap list was full of Double and Imperial somethings, or stuff with European names most people, like me, have trouble pronouncing correctly, but there were still a few more accessible "gateway" beers that everyone should be able to find what they like.

Alpine Bad Boy Double IPA
The bartender who poured this referred to this as a Triple IPA (yikes!) but the Alpine website calls this a Double IPA. I like Alpine beers, it's one not normally available so was willing to try it, but was bracing myself to get whacked in the mouth with this one. Instead, I got a really smooth, reasonably balanced Double IPA with a piney, resiny hop bitterness that kept building up in intensity over time.

Port Brewing 547 Haight
Named after the street address of the Toronado in San Francisco, the bartender told me this was an Imperial Red. It found it rather sweet, fruity and juicy, with some of toffee, roasty flavors also running around, with plenty of hop bitterness to balance all the malt goodness.
at August 14, 2009