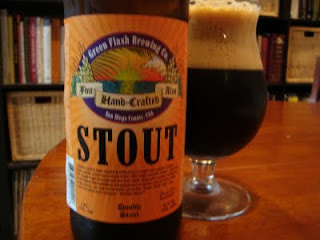 To get myself in a San Diego frame of mind, I decided to giving Green Flash Brewing's Double Stout a try. I've enjoyed their West Coast IPA, an aptly named beer since that hop monster has a mere whisper of malt to pacify the mass quantities of hops Green Flash uses, the West Coast IPA style totally pushed to the limit

Turns out, the Imperial Stout is very much the yang of the West Coast IPA yin. Lot's of rich, creamy, bitter coffee tasting malt in this bad boy, with the barest touch of any sweetness, and a little bitter chocolate character to it. The alcohol is really well hidden in this one. And as you can see, it pours a very thick, foamy head. Not really the beer to have during the afternoon at a San Diego beach during low tide, but works for me as an excellent late night sipping beer.