Sights, Sounds, and Tastes of the Eat Real Festival 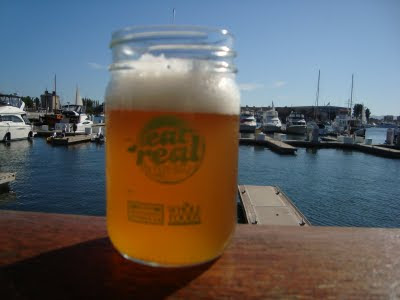 The Eat Real Festival is the place you might expect to see things like a large, red beet tattooed on some guy's muscular arm. I'd describe it as a street festival trying to get you to think locally about your street food. And while you might quibble if that includes a stand selling creme' brulee, they seemed to do a pretty good job pulling off the concept. And for pictures of the weekend festivities in better focus than the one on the right, head on over to Beer and Nosh.

Held the past weekend in Jack London Square, the Eat Real Festival certainly seemed to be a logistical success on the hot Saturday afternoon I was there. Despite the large crowds, there were reasonable enough lines to get food, beer, and the all important trip to the porta-potties. In the center of it all was the Beer Shed. If I have one recommendation for next year's Eat Real Fest, it's that they call it something else. I had visions of having to enter some rickety, dimly lit, poorly ventilated structure simply to get a beer. Imagine my pleasant surprise when instead, the "Beer Shed" consisted of a refrigerated trailer with 40 taps built into it sitting in the open air. And at the front of this trailer a "Meet the Brewer" table was set up, with an hourly schedule of brewers there to pour and talk about their beers.
Of course, it's one thing to meet the brewer, it's another to have an actual conversation with him in this set-up. One brewer, who possibly was as buzzed as I was, glided back and forth behind the table, talking in a volume barely above a whisper about his beer. When I asked "Would you be willing to share what hops you used in this?", he replied "Sure", and then there was a long pause. Then he said, "I need to help this couple over here", and then he moved a few feet sideways, poured them a beer, and started chatting with them. Figuring he wouldn't answer my question, my attention turned elsewhere, and all of a sudden, he glided over and rattled off a couple names of hops I wasn't familiar with, and almost instantly forgot. And with that, he was back over with the other couple. Note to self: Learn your all your hop varieties, and be alert when trying to gather more insight from the brewer about how he made the beer. And being a little more clear headed wouldn't hurt, either.

There was no such problem speaking learning about how Triple Rock made their Bill Brand Brown. They use cocoa nibs in a process similar to dry hopping to give the brew extra roasty, chocolaty dimensions. The Bill Brand Brown was one of many excellent beers Linda and I tried last Saturday, and here are the notes of those I was paying close enough attention to write something down about.

Magnolia Best Bitter
Linda and I detected a raspberry character to this bitter, which had a dry crisp finish. There's something about Magnolia's beer that have this subtle, unique twist on the style you don't find anywhere else.

Linden Street Brewing's People's Common
A surprisingly dry, astringent brew with an acidic, pineapple-like flavor that is far more enjoyable than it sounds like it would be.

Beach Chalet Riptide Red
Has a little toastiness, a little strawberry or raspberry fruitiness to it, and a little hop bitterness in the aftertaste. It's one of those beers that has a little of this, a little of that, and pretty soon, it all adds up to a lot. 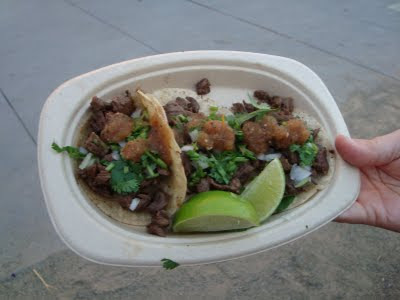