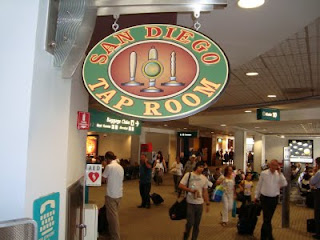 Time to go home. The convention is over, I've packed every thing up, and catch the first available cab to the airport. I have a couple hours before my flight, so head over the the San Diego Tap room located by Gates 3-10 in San Diego's airport.

This place is a typical airport bar, and for the most part, has stuff like Bud Light, Bud, Stella Artois, and Guinness on tap. But they also have a couple taps devoted to local brewpub chain Karl Strauss. I've enjoyed their beers in the past, but didn't get a chance to stop at their location near downtown this time, so figure I'll try a couple of their beers here while I wait for my plane to board.

It's so crowded, I don't walk in, but rather sort of wedge myself into a spot at the extreme end of the bar. The place is littered with empty glasses the harried staff has no time to collect and clean. I get one of the bartenders attention and she pours a Karl Strauss Amber Lager, which does its best to keep its dignity in the Bud Light glass it was poured into. I've always like this Vienna Style lager, with its light nutty flavor in that lingers long after beer is down the throat. It's light drinkable, and there's a slight grassy hop crispness to it. I've always found this rather refreshing.

Finishing that, I then try Karl Strauss's flagship Red Trolley Ale, a red ale named for the red trolleys that roll around the city. It's got a little complexity to it, being a little sweet and fruity, with a little roasted malt, with a little astringency to its finish. It's a solid red ale.

They board my plane, I find my seat, and fly home. 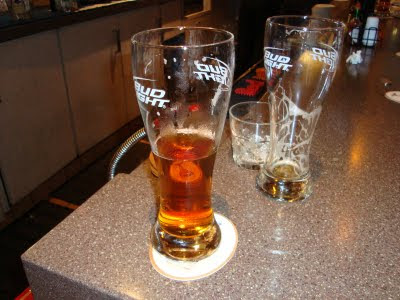