Getting Primed for Jelly Bellies at Blue Frog Grog and Grill 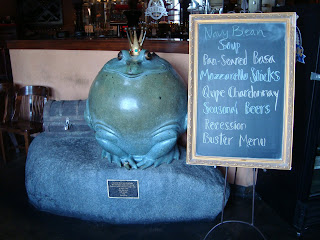 I took off last week from work to spend it with my kids on a so called "stay-cation" about Northern California. One of our destinations was the Jelly Belly Factory in Fairfield, CA and wouldn't you know, Blue Frog Grog and Grill is only about a five minute drive for the factory. Anyone with small kids will tell you well fed kids tend to function on these sort of outings a lot better than unfed ones. The same goes for parents. So it seemed like a win-win situation to stop off at Blue Frog for lunch prior to the factory tour.

We already had some familiarity with Blue Frog, as Linda and I had enjoyed Blue Frog's Red Ale we picked up at our nearby BevMo! about a month prior. I'm not a big fan of red ales, but we both enjoyed its citrus and tangy flavors, its strong malt character, and slightly grassy hop finish, and it was one of the better Red Ales I've had. So we figured we'd each have a different pint to sample during with lunch with the kids.

Blue Frog Grog and Grill is located in one of those sun drenched retail areas that seem to dominate the Fairfield - Vacaville area, where shade seems to be a precious luxury. Linda and I choose the place mostly for the beer, but we also found the food was every bit as good as the beer. And of course, family outings are great opportunities to take slightly out of focus family pictures in bad lighting, where at least person has a funny look on their face. 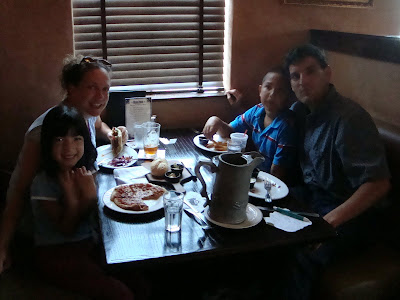 Linda had a flavorful portobello mushroom sandwich, and I was pretty happy with my smoked salmon fish and chips. Linda and I also appreciated the slightly tangy, crunchy red cabbage slaw included with both of our lunch entrees. My six year old daughter Verona proclaimed cheese pizza on the kids menu as "really good". Brandon, my eight year old son, has autism and so is a man a few words, but when asked if his grilled cheese sandwich was "yummy" or "yucky", responded with "yummy" in his high pitched voice. Looks like Blue Frog gets Brandon's thumbs up as well.

But you're probably reading this about their beer, not the kids menu, so here's what Linda and I thought about the beers we tried.

Blue Frog IPA
This dark yellow, fresh tasting IPA had plenty of piney hop goodness, with some floral character in there for good measure, and just a little malt to balance it. A good example of West Coast IPA style done well.

Blue Frog Pub Ale (Seasonal)
This was our favorite beer of those we tried. It's got a little caramel taste to it, a little sweetness, a little piney hops, and a little dry finish and all these little things add up to a lively little session ale.

Blue Frog Hefeweizen
Linda and I split a 12 once glass of their hazy yellow, unfiltered hefe, and found it to be a rather light and wheaty with some aromatic clove-like notes.

Blue Frog Double IPA
We purchased a 22 once bottle of this before we left, and Linda and I split it a couple days later. A strong citrus aroma greeted us immediately upon pouring. As one might expect from the aroma, this one had a very strong grapefruity hop character to it, as well as a little sweetness. There's a good amount of malt in there, which gave this a slightly creamy mouth feel, and this brew really went down smooth despite the strong hop flavors. We really liked the well controlled strong flavors here.

The Jelly Belly factory turned out to be a blast for everyone. I'm always proud of my children, but special mention should go to Brandon, since the large chattering crowds, sudden loud noises, and large spinning and repetitive motions of the factory equipment during the tour pose all sorts of challenges to an eight year old with autism. He handled it really well, and has won yet another small battle to overcome his autistic behaviors.

Does anyone have any ideas of what to do with the bag of jalapeno Jelly Bellies I purchased? 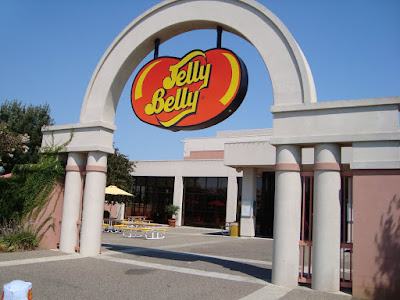