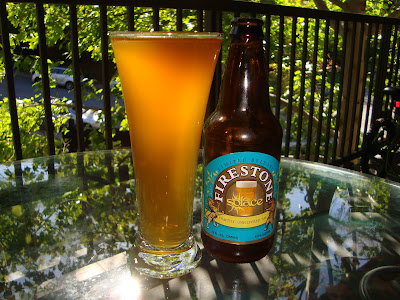 When I started this blog slightly over a year ago, I made two promises to myself. I wouldn't let it become a chore where I felt obligated to have to post things at specific times, and I didn't want it to become yet another beer blog posting beer reviews. In one fell swoop, I'm breaking both of these promises to start a Beer of the Month series of postings.

I've written beer reviews before, and enjoy reading them on other blogs, so it seemed like a monthly focus on a particular beer seemed like a good idea. I've been kicking this idea around for a couple months, and it's been increasingly appealing over time, so it's time to start. So starting this month, I'll be posting a Beer of the Month review within the first couple weeks of each month. I hope you'll enjoy my perspective on interesting beers to try.

The first beer of the month is FireStone Walker's Solace, their recently released summer seasonal. I was intrigued this unusual, somewhat complex, wheat beer for reasons I couldn't quite put my finger on. There were some light fruity banana esters, as well as nice clove spiciness, along the lines of a classic German Hefeweizen. But there's also a little melon-like fruitiness and a slight peppery character as well. It's quite refreshing, and liked the subtle complexity to the brew, which could be easily ignored if one is just in the mood for "lawn-mower", thirst quenching beer.

Not that I get too bent out of shape over styles, but I remained curious. What was this? A Hefeweizen, or something else. After doing a little research, I found the answer to this little puzzle in an announcement on beernews.org, which states:

While Solace is somewhat devoid of style, Brewmaster Matt Brynildson said it will be a sort of unfiltered fusion of a Hefeweizen and a Belgian Saison. Subtle hints of banana and clove aroma will merge with sweet fruit flavor, a medium body and tangy finish. This combination will result in drinkable spring/summer beer with about 6% alcohol by volume.

"Style guidelines are definitely being stretched and exaggerated with the rise of craft beers in the U.S.,” Brynildson said. “I call it a Summertime Belgo-Bavarian Zwickle Saison,” he added jokingly.

OK, so that clears things up. A hybrid beer like this one could end up as a muddled, confused wierd homebrew experiment gone amok. But thankfully, that's far from the case here. So kudos to Firestone Walker for coming up with something innovative and unique, that makes for a nifty summer seasonal. It's available on the West Coast through August.
at June 01, 2010

Email ThisBlogThis!Share to TwitterShare to FacebookShare to Pinterest
Labels: Beer of the Month, Firestone-Walker