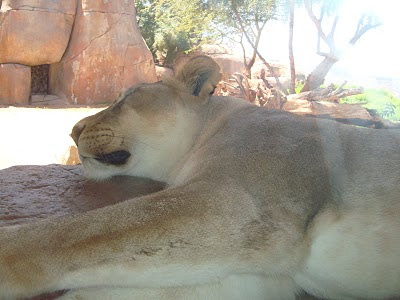 The San Diego Zoo near the city's downtown, and its accompanying Wild Animal Park about 30 miles away in Escondido, are world renowned zoos, earning acclaim for educating millions, while successfully saving several key endangered species in the animal kingdom from certain extinction. But what most animal lovers and environmentalists fail to appreciate is that the San Diego Wild Animal Park easily boasts of the best beer selection of any zoo in the United States, if not the world. I mean, how many zoos give you a choice between Stone Brewing's IPA or Karl Strauss Amber Lager, two topflight local craft brews, as well as the usual safe Corona and Budweiser choices? 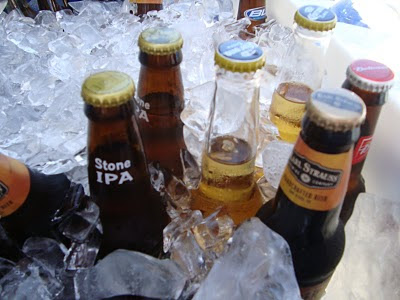 Of course, we really weren't there for the beer, but that was a nice bonus. Some people actually go to zoos to see animals, and for the two days we spent, one at each park, they all seemed quite happy, jumping or running around. A few were taking a nap when we strolled by, but right in front, rather than some far off corner where we could barely see them. There's an odd feeling, not of of danger but more of intrusion, when standing only a couple feet away from a sleeping carnivore, with an inch of Plexiglas separating you from a peacefully observing an animal at rest that would likely maul you otherwise.

And so after our day at the Wild Animal Park, we went over to Stone World Bistro in Escondido. Stone Brewing prides itself on angry beer. I can vouch for that, but they also make an angry looking deep fried grill cheese sandwich, which both kids enjoyed. But I was less than enamored of their angry session beer Levitation, which tasted like their Arrogant Bastard with the malt dialed down, but with the resiny, piny hop punch as strong as ever, resulting in an unbalanced brew that was difficult to drink down. I give them credit for taking risks, but not all risks pay off, and this didn't one just didn't work for me.

Their Sublimely Self-Righteous Ale I sampled next was more down Stone's alley, and it showed. Originally their 11th anniversary release, I found it one of those hard to describe beers with intrigue that draws me in. I'm getting flavors of raisins and other dried fruit, some woody and smokiness, and smoothly astringent hop finish. But Linda and my favorite beer of the evening was the Green Flash Imperial Red Ale, which was not an angry brew, but one with a smooth, slightly creamy and lively roasty malt with only the barest of hop bitterness at the finish. Very vibrant and drinkable, and gave us the warm fuzzies in contrast to the Stone brews which virtually dare you to like them. But as we found out for dessert, Stone Smoked Porter makes for a great beer float with vanilla ice cream.

There's a neat little garden where one run around and jump off and on rocks after dinner. Or, one can just relax. 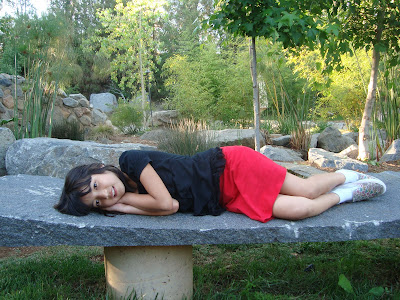 On the way out, I picked up a few 22 ounce bottles of Stone Ale's on the way out, mostly brews I can't get in the Bay Area. Why I picked up a bottle of Stone's Ruination Double IPA, which I can find back home rather easily is a bit of a mystery. Of course, making a few impulse buys that make no logical sense is part of being on vacation.
at June 24, 2010