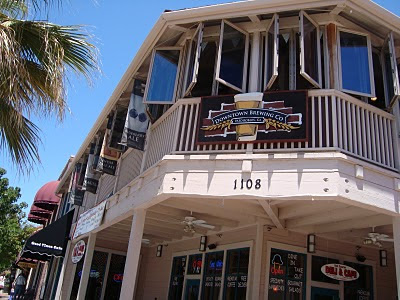 Last week Linda, my wife to be, and I took the kids Brandon and Verona, ages 9 and 7 respectively, on a vacation to Southern California. Like craft beer drinking and running, vacations are a lot about discovery. Discovering new places of course, but also discovering something about ourselves as a family as we pursue common destinations. Many people associate Southern California with vacations, but it's also a great region for craft beer, so I scouted out a few brewpubs I thought we could all enjoy together during the trip.

As vacations lead to discovery, one thing I first discovered as we were getting ready for the trip is that Linda and I both stress over the little trip details, and be quite particular about them. But we often have very different points of view on these details, which we don't back down from very easily. And so as you might expect, getting ready for the trip led to plenty of little bickering firefights between us the day before. Of course, when you see something of yourself in your partner, that can be a good thing, even if it leads to friction. And understanding how this conflict arises allowed us to check my emotions, let logic take over, and allowed ourselves to take control and stop these silly arguments. For five minutes anyway, before we found something else to bicker about. And please don't ask us what all the fuss was about that day, Linda and I still can't remember.

I suppose all that effort into planning the trip was worth it, since got the car picked in record time and it was smooth sailing out of the Bay Area to small rustic town of Paso Robles for lunch. While Firestone Walker is the best known brewery there, their brewpub isn't open for lunch on Mondays, according to their websites, and brewery tours aren't the most kid friendly activities in the world. So instead, lunch was at Downtown Brewing, located in, you guessed it, downtown Paso Robles.

For some odd reason, I decided to start off with the "chick beer" they have on the menu, their Blueberry Ale. Maybe because I was thirsty and it wasn't even noon yet, and the Golden Ale and Wheat Ale on their beer list just didn't seem all that appealing at the time. Or perhaps I am simply becoming more comfortable in my manhood as I get older, and can order a chick beer with a "you gotta problem with that?" attitude. Or maybe I am just a wuss. Whatever my motivations were, it was actually pretty nice. Maybe it was the dozen or so blueberries added to the brew, but there was a very noticeable blueberry flavor to the light ale. But a light fresh blueberry taste, with very light sweetness. Hey, it worked for Linda and me. I also tried their Reggae Red Ale. Soft, rich and with smooth caramel and roasted malt flavors ending with a light earthy hop touch, it was rather quite smooth and drinkable. Another good beer find. 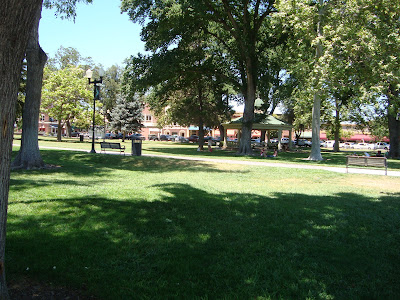 We spent some time in the town small park in the center of Paso Robles before getting back in the car. We had places to go, but I've often found the effort in reaching the big destination is only worth taking on if you can periodically enjoy the small things along the way. But soon, it was time to head back in the car to head for Santa Barbara to meet an old friend from grad school, before heading to points further south. 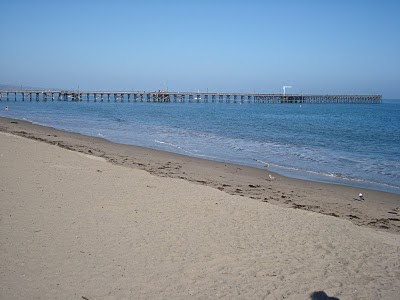