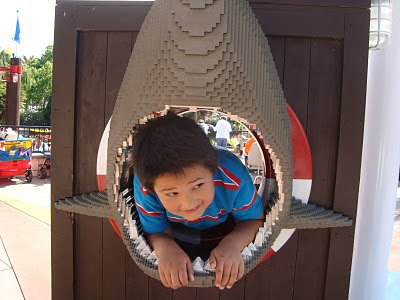 Of all the moments of capitalist history, is there anything more improbable than an amusement park devoted entirely to interlocking little pieces of plastic? Funny thing, the concept works. My kids like building things with Lego, so figured figured they'd enjoy a whole theme park devoted to it, at Legoland Californina in Carlsbad. I figured on seeing plenty of Lego animals, Lego cities, and Lego dinosaurs, but never expected to be entertained by a Lego Mariachi Band.

Unfortunately, crisis hit in the afternoon when a big long sliver lodged in Verona's right big toe as she played on an enormous castle playground, one of the few things in the park not made of Lego. It took no fewer than 30 minutes for the staff nurse to pull out the stubborn sliver stuck deep in her toe. Verona experienced an extended period of agony that hopefully will not be exceeded until she delivers her first child. Most nine year old brothers would be whining to go back on the rides as their sister writhes in pain, but Brandon, who has autism, isn't like most older brothers. The hour at the first aid station seemed a welcome break from all the noise and disorder of the park, and he happily played with Legos in the waiting room while happily singing Frosty the Snowman, of all tunes.

Once the splinter was removed, a boat ride around a small lake full of Lego animals and Lego world monuments, and Verona was recovered and running around the park like nothing happened.

After our day at Legoland, we headed over to nearby Pizza Port Carlsbad. I figured on a Tuesday night, normally a slow one for restaurants, it couldn't be that crowded. It just so happened that Tuesday evening was Game Six of the NBA Finals, and they were also holding an Italian beer tasting, so the brewpub packed full of LA Laker fans and Italian Beer Aficionados created the perfect storm to throw a hand grenade into my well laid plans, excuse my mixed metaphors. A few other families were struggling to feed their kids, and the only space I could find in the place a bench half filled with high school aged Laker fans. Verona refused to sit with them, and started to cry, being very insecure about sitting with strangers. It took a lot of coaxing, but finally, Verona reluctantly agreed to sit with three very accommodating young Laker fans, and found out over time, that sitting with strangers wasn't so bad. Brandon on the other hand, has little social skills, and so no real social insecurities, and eagerly responded to simple commands of "Brandon, time to sit here!" which provided much needed structure he needs when he's confronted with a chaotic scene. Brandon's autism provides many challenges, but the flip side is that sometimes, the autism makes him far easier to work with than "normal" kids.

As for the beer, I had their Good Grief Brown Ale, an excellent brown ale with a smooth coffee flavors from the roasted malt. Linda had some special release Pale Ale, with some funky name she couldn't remember which had this nifty complex hoppy character to it. I realize that's a pretty vague description, but when trying to manage a couple kids eating sloppy pizza in a loud crowded place, I'm not going to sit quietly taking meticulous beer tasting notes. Linda and I also shared a glass of their Revelations Belgian Golden Ale, a delightful composed brew with a slight creamy mouthfeel, a light spicy Belgian yeast character, that just seemed to hit all the right notes. It seemed like this beer would pair well with lots of foods, and heck, it even paired well with our pepperoni and mushroom pizza.

The evening finished a lot better than it started. 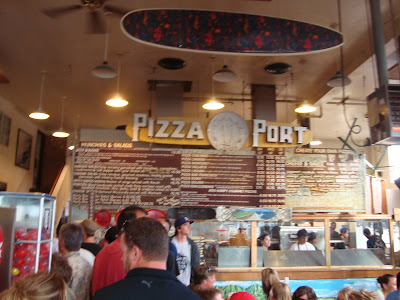