Buying Local Before and During the Devil's Canyon Brewing Beer Dinner 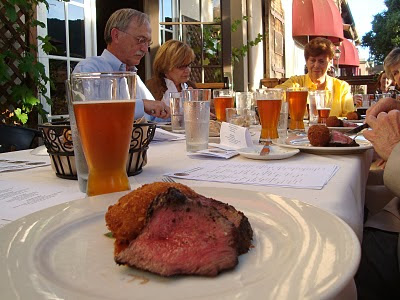 Having moved up the San Francisco peninsula to Belmont about a month ago from the South Bay, Linda and I have been looking for a way to get acquainted with our new local brewery, Devil's Canyon. In one of life's small ironies, the first chance we had was a beer dinner last week at the California Cafe in the South Bay town of Los Gatos. I've enjoyed their Hades Habanero in Santa Cruz and had the Deadicated Amber Ale a few times, but I hadn't had their Scotch Ale and California Rye IPA yet, and both were on this tasty looking and rather carnivorous evening's menu: 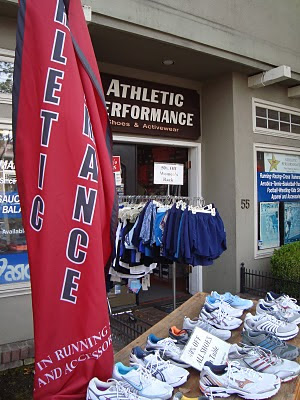 That evening, Christine Kennedy was minding the store, who remembered which running shoe model I normally wear. I'm glad she did, since I had forgotten. Christine's doesn't look a day over 35, and finishes first place in the 50 and older woman's age group in races all over the nation. It's not every day you meet some 50 year old woman who'll kick your ass in a road race. (I know she's kicked mine a few times.)

I pay a little more for my shoes at The Athletics Perform than at some big box retail outlet store, but there's no way you'll find me at one of those soulless, cavernous places. It takes ten minutes to find anyone working there who'll give you a confused stare to a simple question. The profits go to some far removed corporate headquarters, and are rarely reinvested in the local running community. I may save a little of my money, but get far less value for what I spend. And running shoe stores like The Athletics Performance are surviving, and in fact thriving all over the country in the face of deep pocketed corporate retailing competition. Most runners easily recognize the extra service and community involvement they get from a good local running store and spend their dollars there, proving that well run local businesses can be a powerful economic forces.

And that brings me back to the Devil's Canyon Beer Dinner that evening, where instead of simply drinking beer from some far removed brewery, Linda and I actually got to talk with people from Devil's Canyon who actually create the beer, and are passionate about what they make.

Of course, interacting with your local brewer may lead to disappointing results. Inquiring about when they would add Hades Habanero to their regular line-up, I learned they would likely be phasing out that beer, citing a need to focus on a few beers and not getting over extended. Damn! I'm all for quality over quantity, and understand and respect the business decision. I just don't have to like it.

But things got better from there. As the first course was being served, Dan Curren of Devil Canyon's explained the optimal temperature to serve their Deadicated Amber Ale was much warmer than most places serve their beer. At around 55 degree Fahrenheit, the malt flavors definitely become more pronounced, and the hop finish more noticeable than the colder pints of this brew it I've had elsewhere.

During the second course, Linda and I got to chat with Head Brewer Jason Beck about our favorite beer of the evening, their California Sunshine Rye IPA. Linda and I both noted a little bright flavors of apricot and light citrus in this unusual IPA, brewed with Centennial hops, which gave it a smooth earthy and grassy bitter finish. Jason explained he doesn't like going for aggressive hop bitterness in his IPA, unlike most California brewers who go around socking people in the mouth with bags of hops with no hesitation. As much we like beers like that, we really enjoyed the restraint with the hops coupled with the unique and lively blend of flavors of this memorable IPA with the feel good name.

The best food and beer pairing for the evening in my opinion was the third course, where the smokey and savory flavors of the wild boar and Worcestershire sauce harmonized well with the bitter chocolate and smoky flavors of the Full Boar Scotch Ale. And while we appreciated California Cafe chef Bobby Logan's innovative use of ingredients to create layers of flavors in all of his dishes, we couldn't help wonder if the Devil's Canyon Root Beer, with it's complex sweetness derived with cane sugar, agave nectar, and local honey, would go better in a root beer float with good old vanilla ice cream, rather than the kitchen sink of ingredients in his ambitious take on the classic. No matter, it was pretty good anyway.

And so when as people get to know their local brewer, understand their commitment and care to the brewing craft, and taste the final product, is it at all surprising that the 1,500 craft brewery Davids in this country are slowly but surely taking market share away from the the few mega-brewing Goliaths? As an unrepentant capitalist, I'll say it again that well executed local businesses are a powerful economic forces. I just need to keep pestering those guys about putting Hades Habanero back in their line-up.